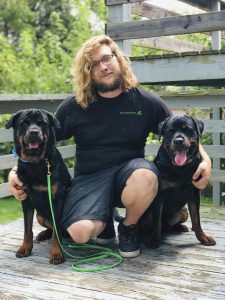 Biography: Benjamin Wolter was born in San Luis Obispo, CA. His family moved to Bloomington while he was very young and he has been in Bloomington since, aside from his attendance at St. Cloud State University in Minnesota. After a long history of working in the food service industry he decided it was a time for a change of pace. Looking at his past, he noticed that he had always been good with dogs, and decided to become a dog trainer. Benjamin came across BloomingPaws and instantly got a job as a Group Play Guardian. During his first year as a guardian, he started attending the Pet Training Program at Top Tier K9 Dog Trainer School. There, he was awarded his Pet Trainer Certification at Mountain State Academy under the supervision of Top Tier’s CEO & Founder Jeff Minder and Mount State K9 Academy’s Kari Koch. After receiving his pet trainer certification, he became assistant trainer under Alex Snowberger at BloomingPaws. He then set his eyes toward the Working Dog Program at Top Tier K9 to help get some more experience and knowledge training working dogs. This program has taught Benjamin how to imprint and forecast dogs in protection, tracking, scent detection, and advanced obedience. In January 2018 Benjamin received his Working Dog Certification from Top Tier K9 and will continue his education towards TTK9’s Service Dog Certification, Decoy Camp, and eventually become a Top Tier K9 Master Trainer.

Benjamin has two dogs, both of them male Rottweilers, The youngest is Iorek Denzel (Right) who Benjamin has brought through Top Tier K9’s Puppy Imprinting Program. Iorek is trained in protection, scent detection, basic & advanced obedience, and is also a Canine Good Citizen as well as a working K9. His oldest is a rescue dog named Rhaegar Targaryen (Left), who is mainly trained in basic and advanced obedience, he loves to play with any type of toy but will settle for wrestling with his brother Iorek or his Dad. Benjamin loves to take his two boys out to the lake and let them retrieve balls out of the water, but also likes to let them relax at home in the back yard. Benjamin has been a musician since he picked up piano at the age of 7. On the weekends, you can catch Benjamin under his DJ handle Vibe Rayshun at the local nightlife scene.

Philosophy & Goals: I truly believe that every dog can be trained at any age with any person who is committed to doing so. The only requirement is having fun and being consistent in your training. I don’t believe in a purely positive approach, or one that is physically dominant. At Top Tier K9 I learned what is called “balanced training” which is using both positive and negative motivations to communicate with your dog effectively. As long as you practice this, you and your dog will live a much more fulfilled and overall stress-free cohabitation. I am also currently working on a thesis combining my two passions, music and dogs. The idea being that I would be using music with specific tones and pitches to calm down dogs that may be anxious, fearful, or aggressive. I test this theory out using the “students” (client’s dogs) in one of our daily training programs. I hope eventually that with this knowledge I can help animal shelters and rescue kennels around the world with any dog’s path to rehabilitation. I also have hopes to open my own kennel out west in hopes to return to my birth state of California, but may settle for Colorado or Oregon as I have family, friends, and colleagues in those areas.